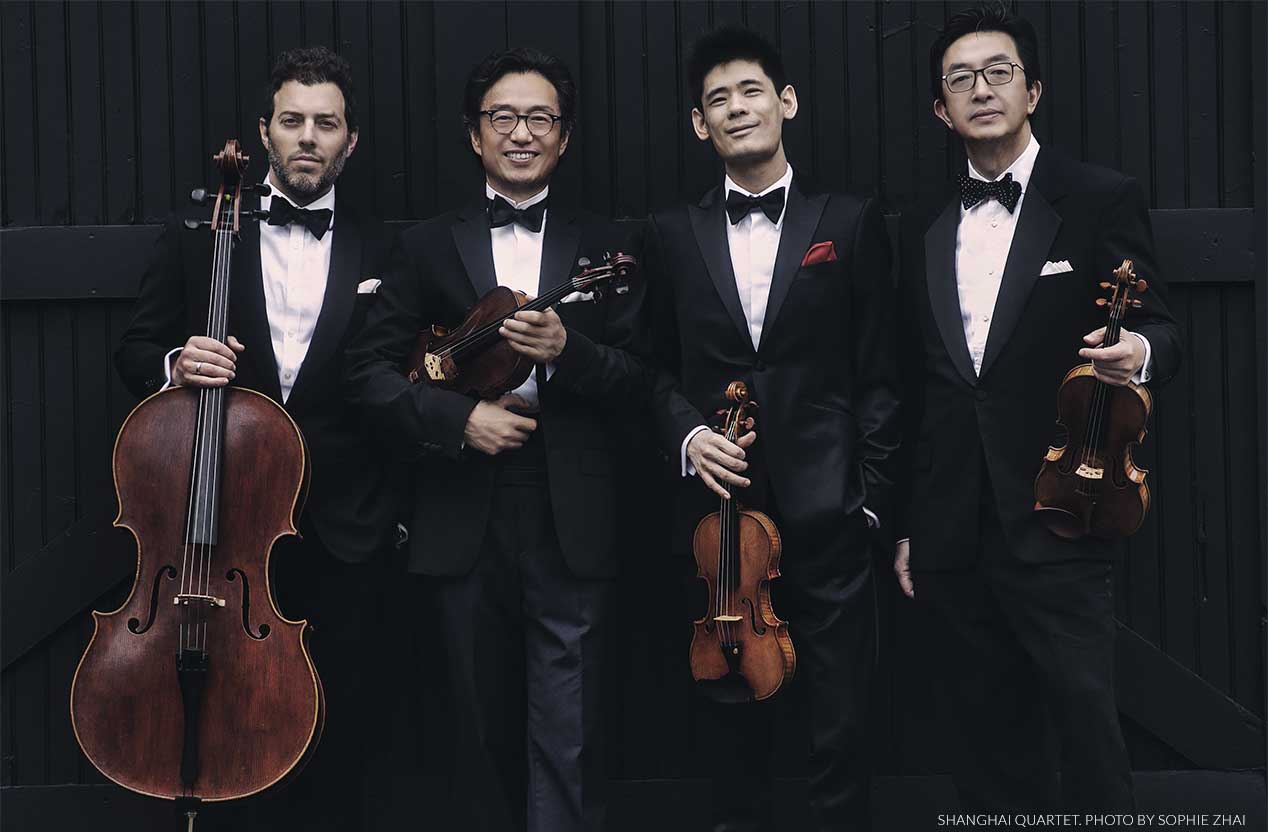 Over the past thirty-seven years the Shanghai Quartet has become one of the world’s foremost chamber ensembles. The Shanghai’s elegant style, impressive technique, and emotional breadth allows the group to move seamlessly between masterpieces of Western music, traditional Chinese folk music, and cutting-edge contemporary works. Formed at the Shanghai Conservatory in 1983, soon after the end of China’s harrowing Cultural Revolution, the group came to the United States to complete its studies; since then the members have been based in the U.S. while maintaining a robust touring schedule at leading chamber-music series throughout North America, Europe, and Asia.

Recent performance highlights include performances at Carnegie Hall, the Metropolitan Museum of Art, the Freer Gallery (Washington, D.C.), and the Festival Pablo Casals in France, and Beethoven cycles for the Brevard Music Center, the Beethoven Festival in Poland, and throughout China. The Quartet also frequently performs at Wigmore Hall, the Budapest Spring Festival, Suntory Hall, and has collaborations with the NCPA and Shanghai Symphony Orchestras. Upcoming highlights include the premiere of a new work by Marcos Balter for the Quartet and countertenor Anthony Roth Costanzo for the Phillips Collection, return performances for Maverick Concerts and the Taos School of Music, and engagements in Los Angeles, Syracuse, Albuquerque, and Salt Lake City.

The Shanghai Quartet has a long history of championing new music, with a special interest in works that juxtapose the traditions of Eastern and Western music. The Quartet has commissioned works from an encyclopedic list of the most important composers of our time, including William Bolcom, Sebastian Currier, David Del Tredici, Tan Dun, Vivian Fung, Lowell Lieberman, Zhou Long, Marc Neikrug, Krzysztof Penderecki, Bright Sheng, Chen Yi, and Du Yun. The Quartet had a particularly close relationship with Krzysztof Penderecki; they premiered his third quartet – Leaves From an Unwritten Diary – at the composer’s 75th birthday concert and repeated it again at both his 80th and 85th birthday celebrations. Forthcoming and recent commissions include new works from Judith Weir, Tan Dun, and Wang Lei, in addition to a new work from Penderecki.

A diverse array of media projects run the gamut from a cameo appearance playing Bartók’s String Quartet No. 4 in Woody Allen’s film Melinda and Melinda to PBS television’s Great Performances series. Violinist Weigang Li appeared in the documentary From Mao to Mozart: Isaac Stern in China, and the family of cellist Nicholas Tzavaras was the subject of the film Music of the Heart, starring Meryl Streep. The Shanghai Quartet is the subject of a full-length documentary film, Behind the Strings that will be released in 2020.

Serving as Quartet-in-Residence at the John J. Cali School of Music at Montclair State University since 2002, the Shanghai Quartet will also join The Tianjin (China) Juilliard School in fall 2020 as resident faculty members. The Quartet also is the Ensemble-in-Residence with the Shanghai Symphony Orchestra and visiting guest professors of the Shanghai Conservatory and Central Conservatory in Beijing. They are proudly sponsored by Thomastik-Infeld Strings and BAM Cases.