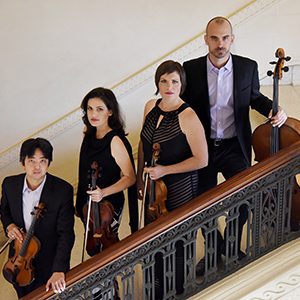 The quartet has performed in some of the world’s finest halls, including New York City’s Carnegie Hall and Lincoln Center, London’s Wigmore Hall, Boston’s Jordan Hall, Mexico City's Palacio de Bellas Artes, Washington, D.C.’s Kennedy Center and Library of Congress, Austria’s Esterhazy Palace, and Seoul’s Sejong Chamber Hall. Their major music festival appearances include the Aspen Music Festival and School, Bowdoin International Music Festival, Cape Cod Chamber Music Festival, Rockport Music Festival, Caramoor International Music Festival, Music at Menlo, the Banff Centre, the Seoul Spring Festival, and many others. In addition to their performing career, they have been artists-in-residence at the University of Illinois in Champaign-Urbana since 2012, where they maintain private studios and direct the chamber music program.

Their chamber music honors and awards include the grand prizes in the Banff International String Quartet Competition and the Fischoff National Chamber Music Competition; the Young Concert Artists International auditions in New York City; the Cleveland Quartet Award from Chamber Music America; an Avery Fisher Career Grant; and a grant from the Fromm Foundation. From 2007-2010, they were in residence at the Chamber Music Society of Lincoln Center’s Chamber Music Two.

The quartet's latest album is a collaboration with the Jasper String Quartet (Marquis Classics, 2021), produced by Grammy-winner Judith Sherman. This collaborative album features the world premiere recording of Dan Visconti’s Eternal Breath, Felix Mendelssohn’s Octet in E-flat, Op. 20, and Osvaldo Golijov’s Last Round. The Arts Fuse acclaimed, “This joint album from the Jupiter String Quartet and Jasper String Quartet is striking for its backstory but really memorable for its smart program and fine execution.” The quartet’s discography also includes numerous recordings on labels including Azica Records and Deutsche Grammophon.

The Jupiter Quartet remains strongly committed to making music during these challenging times. In July 2020, the Jupiter Quartet gave the world premiere of Michi Wiancko's To Unpathed Waters, Undreamed Shores, which was commissioned for the ensemble and presented via livestream by Bay Chamber Concerts. Other recent and upcoming livestream concerts include performances presented by Bowdoin International Music Festival, Asheville Chamber Music Series, CU Presents at the University of Colorado Boulder, Arizona Friends of Chamber Music, and UCLA Chamber Music at the Clark, as well as virtual residencies with the University of Iowa and Middlebury College.

The Jupiters place a strong emphasis on developing relationships with future classical music audiences through educational performances in schools and other community centers. They believe that, because of the intensity of its interplay and communication, chamber music is one of the most effective ways of spreading an enthusiasm for “classical” music to new audiences. The quartet has also held numerous masterclasses for young musicians at Northwestern University, Eastman School of Music, the Aspen Music Festival, Encore Chamber Festival, Madeline Island Music Festival, and Peabody Conservatory.

The quartet chose its name because Jupiter was the most prominent planet in the night sky at the time of its formation and the astrological symbol for Jupiter resembles the number four. They are also proud to list among their accomplishments in recent years the addition of seven quartet children: Pablo, Lillian, Clara, Dominic, Felix, Oliver, and Joelle. You may spot some of these miniature Jupiters in the audience or tagging along to rehearsals, along with their grandparent babysitters.